OMF Scientific Advisory Board members Ronald G. Tompkins, MD, ScD, and Jonas Bergquist, MD, PhD, are participating at the annual RME sponsored Roundtable meetings at the Lejondal Castle outside Stockholm on October 15-16. These meetings bring together leading researchers and clinicians from across Europe focused on ME/CFS. The aim of the meeting is to provide opportunity for discussion and information about on-going research and clinical development. Dr. Bergquist attends this event annualy. Dr. Tompkins is joining for the first time and will be presenting on “Multi-omic Research at the ME/CFS Centre, Harvard”.

Drs. Tompkins and Bergquist also will both be attending the 12th Annual RME Sweden Conference following the Roundtable meetings. This year’s conference, ME/CFS – A Multiple Challenge for Researchers and Caregivers, is being held in Stockholm, Sweden on October 16 and in Umea, Sweden on October 17.

Dr. Bergquist will be presenting at the public meetings. His talk is titled: “What do we know about ME/CFS? What do we think we know? What´s uncertain?” 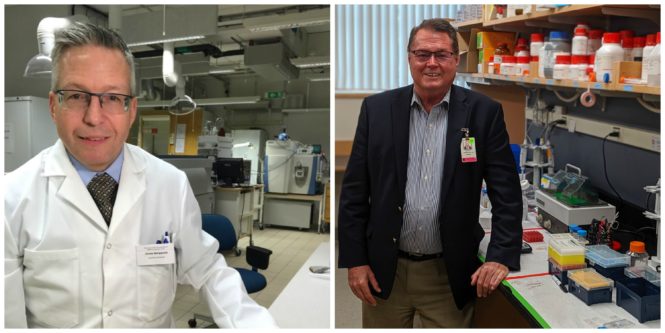 Thank you to RME Sweden for their continued partnership in raising funds for research and for helping increase education and awareness.

Recognizing that the African American community as well as many minorities are underserved and under diagnosed in the U.S., with the help of advocate Llewellyn King, Linda Tannenbaum brought a spotlight on this issue as a guest on the award-winning SiriusXM Radio Urban View, “The Joe Madison Show.” This show airs weekdays from 6 AM to 10:00 AM ET and has a tremendous following. Joe Madison is described as “a tireless advocate for African Americans and other minorities.”

During the interview Linda was able to educate the listeners about ME/CFS and encouraged them to join OMF in our quest to find a biomarker, treatments, and a cure. Linda clearly delivered the message that we are a unified community and share a common mission to help all patients return to living full lives.

Click here to view the video from the studio.

Llewellyn said of the interview, “because he understands the importance of basic research which may lead to a breakthrough, Dr. Tompkins is one of the most important researchers seeking answers.”